A narrow focus can be a hindrance.

I missed the obvious because I was too tightly focused on one name: Albert.

Albert Filek and his wife, Katarina brought their two children to the US in 1864. They claimed their homeland as Bohemia.

After much searching for immigration and naturalization records, it FINALLY occurred to me that, in his place of birth, his name would not have been Albert; it would have been Vojtech.    I feel like such an idiot. I should have known that!  But better late than never, I guess.
Posted by Mary Foxworthy at 8:44 AM No comments:


According to 23andMe, my DNA test results show that I am 3% Neanderthal. 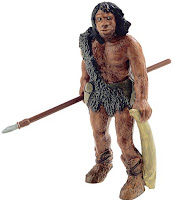 The common perception of Neanderthals is of a brutish, warlike culture. People with very rugged features and a posture that was not quite erect. Because they never developed a cohesive society, we think of them as wild and savage.

New research has taken a new look at their attributes and culture. They were creative, innovative, and loved music. They simply loved to fight – even among themselves. They were curious and inventive. They traveled. “Think of a tribe that was 100% ADHD and bipolar — no stability — complete and utter madness.”[1]

At the same time Neanderthals were in Europe, the group called “Modern Humans” were living in Africa. They were the original hunter-gatherers. Physically they were more modern looking than the Neanderthal and had a more erect posture. What they were not was creative and innovative. They were very stable. Change came very slowly to their society

Apparently it was the interbreeding between Modern Humans and Neanderthals that gave us the best of both cultures that we enjoy today.

This article: Surprising Way Your Neanderthal Genes May Affect You is what inspired this post.

The DRD4 7R gene has been thought for some time to have a Neanderthal origin. This gene is also known as the Wanderlust Gene or the Adventurer’s Gene. About 20% of people carry DRD4 7R. It has been tied to curiosity and restlessness[2]. People with this gene like to explore new places and things, to take risks, to create and innovate. I love it!

On the other hand, research has also linked this gene to ADHD and to bi-polar disorder. Well, you can’t have everything.

As for me, I’m curious about everything. I want to know how everything works and see what’s beyond the horizon. Am I inventive or innovative or creative? I’d like to think so.

So I am celebrating and loving my 3% Neanderthal.


[1] Surprising Way Your Neanderthal Genes May Affect You


Since I have no new content of my own this week, here are links to some useful posts.

Here's some help for preserving our digitized photos and documents:
Future Proofing Digital Photos and Documents

Links to maps.  (I love maps)
5 Types of Maps Every Genealogist Should Know

Posted by Mary Foxworthy at 10:37 AM No comments: