Is It Soup Yet?

Her point is that the admixture results we get from DNA tests ARE ESTIMATES. They are educated guesses. Please note that these estimates vary from one testing service to another. They are not definitive; but some of the unexpected results may be interesting.

I claim that these estimates are soup. Soup in progress – still on the stove but not the final product.

Soup is generally a combination of several, sometimes many, ingredients. So are we. Looking at a soup pot on the stove we can easily see the large ingredients; but what about the herbs and other small bits that give the soup its flavor?

My first views of my admixture showed a couple of surprises. I trace my Polish ancestors to the late 18th century – all in Poland. So why am I being told that I show Scandinavian or Greek heritage?

Well, history implies the Scandinavian part. In the 1650’s there was a 5 year war between Sweden and Poland. Five years!. I’d bet that some Swedish soldiers married and settled in Poland. I have no doubt that many other Swedish soldiers left their DNA scattered among Polish women.

Greek is a little more far-fetched, but my mother’s maiden name is Ganas. A search on that surname shows mostly Greeks. So maybe several hundred years ago a traveling merchant from Greece chose to stay in Poland. I’ll never know but it brings up a possibility.

I’m glad that my curiosity led me to look at these seeming anomalies. They make my heritage a bit more interesting.

I am comforted by seeing my admixture concentration where I’d expected it to be. But if, as 23andMe tells me, I carry Neanderthal genes, then I probably also carry some from Sweden and Greece.

My point is that while admixture is just an ESTIMATE, some of the outliers may be worth consideration.

Posted by Mary Foxworthy at 11:29 AM No comments:

Oh, Cousin – Where Art Thou?

My current focus is on finding cousins via DNA matches. I’m still waiting for results from my Ancestry.com test, but there are lots of matches from my 23andMe and My Heritage tests. 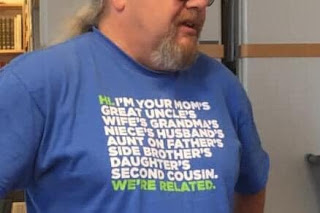 I got all excited when I learned about DNA Painter.  I downloaded match information and painted it. It’s a very colorful DNA map. But I also created a problem for myself and now I’m having to backtrack a little.

Problem: I failed to finish the research to add some of them to my family tree. I am a “big picture” person who sometimes tends to gloss over the details. That almost always causes problems, but the details are not the fun part.

Posted by Mary Foxworthy at 11:34 AM No comments:

There are so many new tools for genetic genealogy that it’s been a challenge to catch up.

DNA Painter has some great tools. Here’s a sample of my chromosome map showing that I’ve painted 43% of my map. The legend on the right shows the familial relationships. I’ve mapped matches from 23andMe, MyHeritage, and FTDNA. I don’t yet have results from my Ancestry test.

The legend also shows that I’ve imported the ethnic origins of my chromosomes as interpreted by 23andMe, but they’re not displayed in this image.

Another useful tool is Blaine Bettinger’s Shared cm Project. The Shared cM Project (ScP) is a collaborative data collection and analysis project created to understand the ranges of shared cM associated with various known relationships. Click on the link for an explanation of the project. 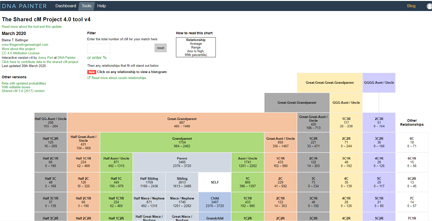 DNA Painter will also show your family tree based on the ancestors you have listed and showing the color of each group. 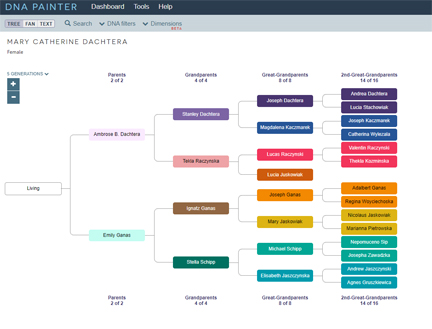 There’s a contrast between my ethnic origins as shown by 23andMe and those from FTDNA. Both of these reflect the raw data from the same test.

Here is a sample of the DNA Painter chromosome map showing ethnic origins as per 23andMe. Familial relationships not shown in this image.

And here is the chromosome map of my ethnic origins as interpreted by FTDNA. Again, the same raw data as above.

Another interesting contrast is between 2 different tests interpreted by My Heritage. My Heritage does not have a chromosome mapping tool, so here are the two maps.

Posted by Mary Foxworthy at 11:18 AM No comments: