This is more complex than I thought

I’ve started on the YouTube project I mentioned in a previous post. Lured by the ease of use of Microsoft Movie Maker, I dived right in.  Problem is that planning the video is the hard part.  My first effort will be for my eyes only – just an experiment, but that doesn’t mean that it’s simple.

First, decide which line to start with.  I picked the one for which I have the least information because I thought that would make for easier decisions on content – not too much to choose from.  I’m rethinking that decision.

Starting with a mind map using XMind (free software), I laid out the kind of content to include.  Very simple for my first project. 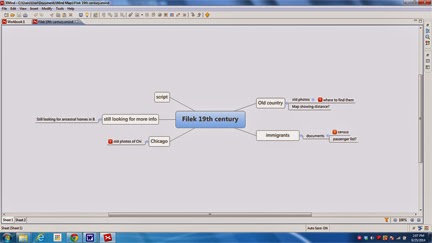 I have no old photos because this is not my family – its my children’s paternal heritage.  So I went off looking for old photos of . Not very many that don’t have full copyright restrictions.  Then I looked for old photos of late 19th century which was much easier.  I’ll use images of census documents to show the families.

The next step would be a script, or so I thought.  Actually the next step is a storyboard.  I just use an outline for planning the flow of the video.  It’s not complex enough to need a true storyboard.

Then I started a script.  This is not as simple as just writing.  I tend to be pretty wordy, and I have a time constraint so scripting is a challenge.  I wonder how many versions will be created before I get one that will work.  I’m using Marlis Humphrey’s guidelines for a video which means it should run no longer than 6 minutes.  Mine will be much shorter than that partly because I’m having trouble coming up with the right narration content; and partly because I don’t like watching videos that are more than 3 or 4 minutes long.

Getting my mind around this has been a challenge.

So I’m thinking of shelving this project and doing my first attempt using one of my own lines.  Maybe it will be more comfortable working with the ancestors I know the most about.  Will having more material make it more difficult?  Hope not.

So I’m off to start another mind map.

Posted by Mary Foxworthy at 2:48 PM