Albert (Vojtech) Filek was my children’s paternal 2nd great grandfather. He came to the US from 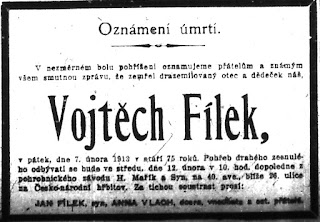 Bohemia in 1864 and settled in Chicago, Illinois. In 1864, Bohemia was part of the Austro-Hungarian Empire.  I am trying to learn where Albert and his family lived in the “old country”

The easy sources, passenger lists, and naturalization papers, have thus far yielded no information.  If he filed his Declaration of Intent in Chicago at his first opportunity, it would have been destroyed in 1871 in the Great Chicago Fire.

I learned that Chicago’s Czech language newspaper, Denni Hlasatel (Daily Herald) often included place of birth in published obituaries; and that these newspapers have been microfilmed and are archived in several places.

The Czech & Slovak American Genealogical Society ofIllinois has published an index to these obituaries. The wonderful genealogy department at my local library, Indian River County Library, has this volume in its Chicago collection. There were several Fileks listed. Once I found that Vojetch’s obituary had been published, I was able to get the appropriate films from TheAbraham Lincoln Presidential Library via inter-library loan.

The bad news was that I found no place of birth. Although I was disappointed, I was excited to see his published obituary. For some reason it made him seem more real to me.

Posted by Mary Foxworthy at 3:32 PM