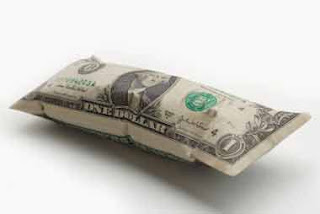 Using the CPI (Consumer Price Index) Inflation Calculator from the US Bureau of Labor Statistics, I see that things may not have changed that much. It is also important to realize that the world of finance was much different in the past.  It was more difficult to get a mortgage or other kind of credit.  Savings were often kept at home rather than in banks. Only the well-to-do had checking accounts.  By contrast, creditors, today are often more than willing to extend credit to almost anyone who is breathing.

That still doesn’t look like much in today’s dollars, but this was the Great Depression when very many were unemployed.

Certainly there are many more factors to consider when trying to compare yesterday’s economics to today’s; but even this simplistic comparison is interesting.

Posted by Mary Foxworthy at 3:02 PM