The key to finding records anywhere is knowing where to look. That can become especially tricky looking in a foreign country where you don’t know the language All of my grandparents were born in .

My mother knew that her father came from the . It didn’t take long for me to home in on Iwno, get LDS microfilms, and find his birth record.

Mom also knew that her mother was born in Grabow.  When I began this project in 1999 there were not as many resources available online.  The best resource for finding a village in was a site called Shteltseeker – now called TownFinder on JewishGenWeb. I entered the name Grabow and specified that it was in . The search results came back with 12 villages named Grabow – scattered all over the country.  It was sort of like knowing that your relatives came from a town named somewhere in the . I got a road atlas of to help locate all of these Grabows.

I started ordering LDS films from various Grabows but got very frustrated and switched my focus to other searches.

Then, just a few years ago I learned of a Polish site called The Poznan Project. Volunteers have been, and still are, transcribing all 19th century marriages in  (then called Posen by the Prussians). It has a powerful search engine.  I found my great grandparents’ marriage in 1872 in the town of nad Prosna which translates to Grabow on the Prosna river.

LDS film 1189069 showed my Grandmother’s baptism. Except for deciphering ancient handwriting, these Catholic Church records are pretty easy because they’re written in Latin 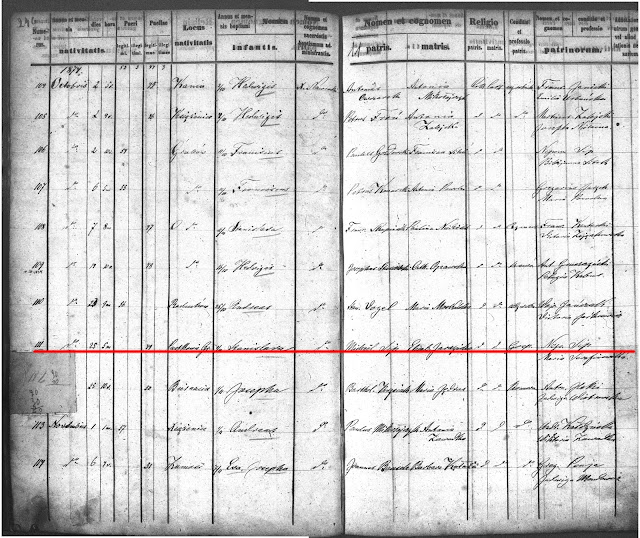 This Baptism register shows that Stanislawa Sip was born on to Michael Sip and Elizabeth Jasczynska (they listed the mother’s maiden name) in Pustkowie Grabow, one of the 16 villages that comprise the town of nad Prosna. The place of birth is important because a church may have served several different villages in the area. The record also shows her father’s occupation and the names of her Godparents. This was very exciting.

began keeping civil records in 1874. I got much more information by reading the civil record of her birth. 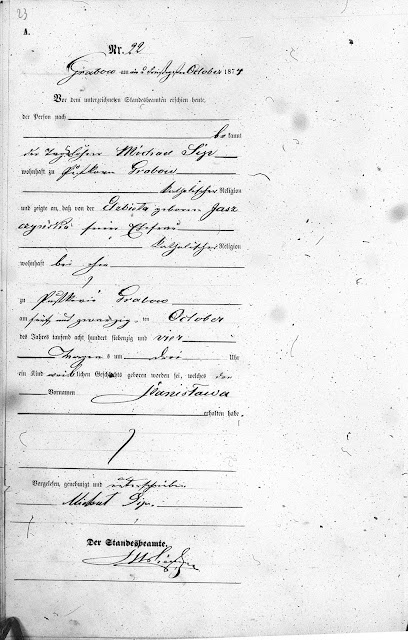 Not so easy. The forms are printed in German Script and filled out by hand in German. Thank goodness for Google Translate!

For both the bride and groom the information includes.

Just as in our modern times, a wedding generally took place in the bride’s church. These civil records give much better information on where both parties were born.

Using The Poznan Project and other Polish genealogy sites has made my searches much more productive.  Not that I’ve found everyone – there are still plenty of Polish puzzles to solve.

What adds some meat to the bare bones data is that, using Google Earth, I’ve been able to see where my ancestors came from. The villages look much different, of course, but it still gives the perspective of the land. Was it forest or farmland? Hilly, mountainous, or flat?  My experience shows that if there’s a numbered road through the town (Hwy 449 for example) Google Street View has probably traveled it. It has been so much fun to drive through my ancestral villages.

!!!   Many towns even have their own websites that include the town’s history.

Hooray for the internet!