I beat you by a couple of years, Randy.

In 1962 I was hired as a computer operator in the biostatistics department of a pharmaceutical company. The computer was a Bendix G-15 about the size of one of today’s Sub Zero refrigerators. Main I/O (Input/Output) was via 5-channel paper tape. There was, of course a console with keyboard; and we also had 2 magnetic tape drives and a CalComp plotter. 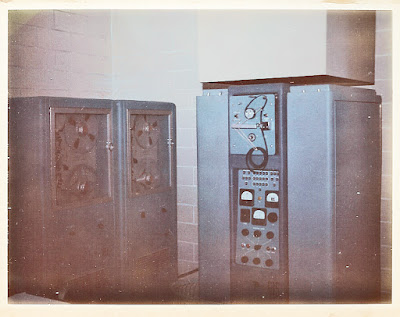 The structure above the computer is an exhaust hood to dissipate the heat from the vacuum tubes. No transistors.

My boss, David Calhoun, a biometrician, was the closest thing to a genius I’ve ever met. When I was taking math courses at night at , he was able to elaborate on the concepts – relating them to work going on the labs – in terms I understood.  He was able to speak at my level making me feel that I was listening at his level.  If he couldn’t remember a formula, he derived it. Amazing.

I learned to program in ALGOL and then in machine language on this computer. Then I moved to FORTRAN and Assembly Language on a (Scientific Data Systems) 940 that we connected to remotely using a 110 baud modem on a Model 35 Teletype machine.  I learned about database design and experimental design.

My last job as a Scientific Applications Programmer was as a contractor at Ford Motor Company’s CAD/ department in .  After that I moved into technical sales support and software training.  I also got to work in “distance learning” in its early stages.

My first personal computer was a Tandy (Radio Shack) Model 16 acquired in 1982. It had two 8-inch floppy drives. By that time I’d advanced to a 300 baud modem. High speed!! I discovered Bulletin Boards big time.  One day I got a call from the telephone company. They thought they might have a problem because in one month my phone bill jumped from whatever the basic charge was at the time to just over $300.00.  The woman just laughed when I told her about my bulletin board roaming.  I was much more discriminating after that.   I did some programming projects in BASIC.

By 1984 my husband and I had an PC clone. We used WordPerfect and Lotus 123. Does anyone remember daisy-wheel printers? Talk about . We soon discovered that we really needed two computers because we had differing ideas on disk file organization. And each of us knew that our approach was the best one. Result: his and hers computers.

In the late ‘90’s I had a digital photo restoration business called Photo Rebuilders.  The web site can still be found on the wayback machine, I think.

Genealogy became a major interest for me in 1999 and has consumed most of my computer time since then except for an 8 year hiatus.

We switched to laptops in 2004 when we moved aboard our sailboat to go cruising. My main usage then was weather, weather and more weather, email, photo storage and tweaking, and researching routes and destinations. We moved back to land in 2012 and I got back to genealogy.

Now, I spend most of my day at my computer. Genealogy, Google+, blogs, Facebook, news, crossword puzzles, and games. I especially like hidden object games.

My name is Mary; and I’m a computer-holic/genea-holic.

Posted by Mary Foxworthy at 9:34 AM

Email ThisBlogThis!Share to TwitterShare to FacebookShare to Pinterest
Labels: computers