In this age of political correctness, it is easy to forget the ethnic epithets that were common in past decades.  Those of us of a “certain age” remember them.  Words that were used to denigrate those who were not of our particular ethnic persuasion.

Back in the day, these words were common in the neighborhood.  But I was surprised to find them in a more respected context.

Searching Chronicling America for newspaper mentions of family surnames, I found the following.

In an article about a knife fight that took place in an Italian neighborhood: St. Paul Daily Globe., December 18, 1894 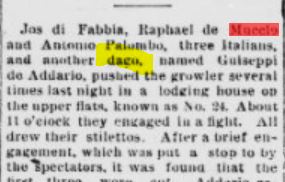 In an article about a local physician’s trip to Japan: The Indianapolis journal., April 10, 1904

Times were hard then. People were hard then – harder than we are now. People didn’t trust others who were not like them and they didn’t hide it.
We’ve come a long way since those days, but unfortunately those biases and prejudices are still a part of our world. We’re just more subtle these days – with a few notable exceptions..

Posted by Mary Foxworthy at 1:40 PM