Everyone searching for European ancestors has encountered first names that are unique to a nation or region.  Many of these are quite common and easily translated into English.  Every country also has some names that do not translate easily or/and are so old fashioned that they’ve been out of use for many years. Here a are a couple that I’ve encountered researching my Polish ancestors. 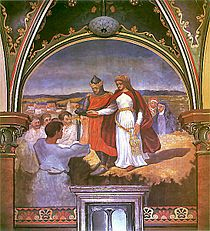 St. Kunegunda (1224-1292) Daughter of King Bela IV and niece of St. Elizabeth of , she married King Boleslaus V of Poland at sixteen. On his death in 1279 she became a Poore Clare at the Convent of Sandeck, which she had founded. She also built churches and hospitals, ransomed Christians captured by the Turks, and served the poor and ill. She is also known as St. Kinga. Her cult was confirmed in 1690. Feast day July 24. 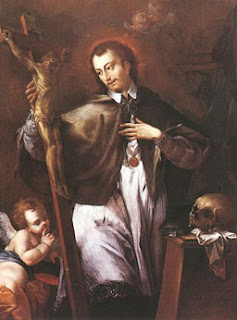 John of Nepomuk (or John Nepomucene) (Czech: Jan Nepomucký) (c. 1345 – )[1] is a national saint of , who was drowned in the  river at the behest of Wenceslaus, King of the Romans and King of . Later accounts state that he was the confessor of the queen of and refused to divulge the secrets of the confessional. On the basis of this account, John of Nepomuk is considered the first martyr of the Seal of the Confessional, a patron againstcalumnies and, because of the manner of his death, a protector from floods and drowning.

I have found only a few instances of this first name.  Since this is the patron saint of , it leaves me curious to learn if there is a possible connection to in my ancient ancestry.

Posted by Mary Foxworthy at 3:08 PM