M is for Microfilm - A to Z Challenge

My genealogy adventure would never have gotten off the ground without microfilm – first through the National Archives, and then through the LDS Family History Library. 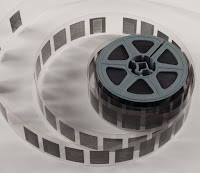 Microfilm and its cousin, microfiche, have been used since the late 19th century as a method of preserving documents.  John Benjamin Dancer was one of the first to produce microphotographs in 1839 [1]    By the 1920’s microphotography was coming into wider commercial use to preserve books, documents, cancelled checks, etc.

For decades, microfilm has been a primary document preservation method for libraries and institutions, archives and commercial businesses around the world.  The National Archives and Records Administration (NARA) microfilm collections include census records, immigration and naturalization records, military records among many others.  This NARA link takes you to more information about their film collections.

Its use in genealogical document preservation began in 1938 when the Genealogical Society of Utah, which now does business as FamilySearchInternational the official organization for the genealogy of The Church of Jesus Christ of Latter-day Saints, (LDS) began its microfilm project.[2]   Church members have traveled the world filming civil records as well as religious record books from churches and synagogues.  These films are available to view through any LDS Family History Center.

Reading films was once a tedious process.  The readers were huge devices. Once the film was loaded, it required hand cranking to go through the film frame by frame. Before the age of computers and printers, information had to be transcribed by hand.  Later, there were readers that would send the desired image to a printer.

Today some of us are lucky enough to have access to electronic readers controlled by computers. No more hand cranking.  I can use these at the Indian River County main library here in Vero Beach, Florida.  I simply plug a flash drive into the computer and this reader scans the image to the drive for me.  It's great!

Microfilm may not be one of the seven wonders of the world, but it is definitely a wonder in my world.

Email ThisBlogThis!Share to TwitterShare to FacebookShare to Pinterest
Labels: 2017 A to Z