A to Z Challenge – S is for Steerage 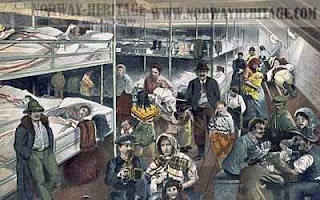 Many of our immigrant ancestors sailed to the United States in conditions we cannot imagine.  They traveled in “steerage” or “tween decks”.  This was the lowest deck of a ship – called steerage because it was often at the same level as the steering mechanism of the ship. Or it was a relatively shallow space between decks.  Depending on the year of passage and the shipping line, people may have been packed in large compartments of double deck bunks, fed provisions that were barely edible; or they could have been given more humane treatment and food that actually could provide sustenance; and even medical attention.

GG Archives has articles and images describing what our immigrants experienced including examples of tickets, passenger lists.  There is also a comparison of ticket prices shown in today’s dollars.

Our ancestors left everything they knew:  home, extended family, livelihood. They spent weeks at sea in atrocious conditions in hopes of a brighter future.  Pretty gutsy if you ask me.

Posted by Mary Foxworthy at 8:54 AM

Email ThisBlogThis!Share to TwitterShare to FacebookShare to Pinterest
Labels: A to Z, steerage